Evolved to live in some of the harshest conditions on Earth, the mysterious and elusive snow leopard can be found high in the Spiti Valley of the Himalayas – at altitudes of over 15,000 – 16,000 feet above sea level. Prepare for an adventure like no other in the Kibber Wildlife sanctuary.

Witnessing a snow leopard in the wild is a rare opportunity that few others get. They’re some of the most difficult animals to spot our in their natural habitats, but with our qualified, trained guides with expert knowledge of the environment and behaviour of this spotted big cat, you’ll be venturing prepared.

The best chance to see these magnificent creatures is during the wintertime. The prey of the snow leopard – bhorals (mountain goats), ibex, Himalayan Thar, and the near threatened Markhor – descend during the colder months. The snow leopard follows.

This is a mystical trip of nature at its most real, combined with cultural wonders to visit and learn about along the way. India’s 500-600 snow leopards live in a land where Buddhist lamas train, Key Monastery. 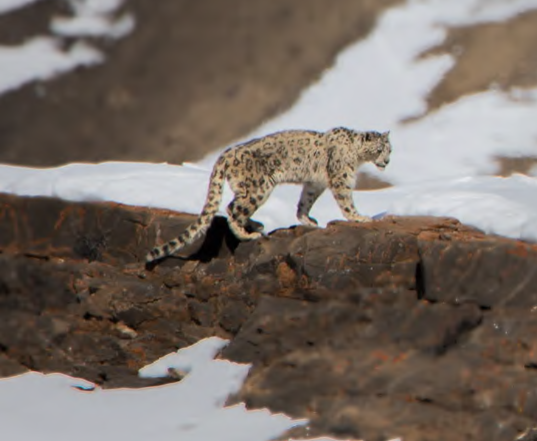 During this snow leopard safari, you’ll only have the chance to spot other wonders of wildlife. We’ll keep our eyes open for the Himalayan Red Fox, Blue Sheep, and Himalayan ibex, along with bird species like the soaring Golden Eagle, vultures, and other migratory species. Experience the folklore of Rumbak Valley, where nature and civilisation are tied together. The authenticity and wild side of Ladakh, where the snow leopard roams, is where you’ll encounter nature at its most primal.

Arrive in New Delhi.
Transfer from airport to Hotel Lemon Tree.
Enjoy a restful night during your overnight stay at the hotel.

Catch an early morning flight to Chandigarh (flight duration: 1 hour).
Upon arrival, we travel to Rampur.
Stop for breakfast and lunch on the journey.
Arrive in Rampur and check in to Hotel Nau Nabh Heritage at approximately 4 p.m.
Enjoy some necessary rest and relaxation at the hotel.
Tuck in to dinner.
Overnight stay.

Have breakfast in the morning and leave for Kibber.
Reach Norling Home Stay in Kibber.
Rest and relaxation is necessary so as to acclimatise to the high altitude, preparing for the snow leopard safari adventure to come.

Each day in Kibber, we’ll meet for breakfast at 8 a.m.
Our scanners will be on the lookout for signs of snow leopards from early morning.
We’ll learn the best way to proceed from them every morning, as we receive news, then move to the location.
We travel as close as possible to the reported location by vehicle, then walk/hike to get the best view possible.
Our guides and porters will assist us in carrying all our camera equipment.

Nature is unpredictable. Depending on what our scanners have found, we have to walk for as little as 10 minutes or as long as 3 hours to reach our destination. This changes, depending on where the cats are spotted.
If snow leopards are not seen, we’ll focus on the other magnificent wildlife species of the region, like the Red Fox, Himalayan Ibex, Blue Sheep, Bearded Vulture, Golden Eagle, and many others.

During this period, we’ll also visit the Key Monastery and explore the village on foot.

We leave Kibber for Rampur at 5 a.m. for the longest journey on our safari and tour (12 hours).
Arrive in Rampur and check in to Hotel Nau Nabh by 5 p.m.

Enjoy much needed rest, relaxation, and dinner during this overnight stay.

After breakfast, we’ll leave the hotel and head towards Chandigarh.
Arrive at Chandigarh airport in the late afternoon.
Take a flight to New Delhi.
Arrive in New Delhi at 7 p.m.
Check in to Hotel Lemon Tree Premier.

Transfer from hotel to airport (according to the timing of your international flight).

The average day temperature on the Snow Leopard expedition will be -5 degree C and it can drop down to -20 degrees C in the night. The rooms of the home stay in Kibber are wood heated making it warm and comfortable.

All guests must take out comprehensive travel insurance covering them for personal effects, personal accident, medical and emergency travel expenses.

Guests with medical history of breathing or heart related diseases are advised to consult their doctor and will need to present a Doctor’s certificate.

The itinerary of the Snow Leopard expedition will be flexible and might change due to heavy snowfall or unavoidable circumstances.

The Home Stay in Tabo and Kibber are basic but comfortable and hygienic. They are one of the best available options in both destinations considering the remoteness of the area. We will provide maximum possible luxury and comfort on the Snow Leopard expedition.

For photographers, a minimum of 600 mm lens is recommended for the Snow Leopard Expedition.

Enquire about add on special rate with the below package

Tigers and Wildlife of Bandhavgarh and Kanha Safari